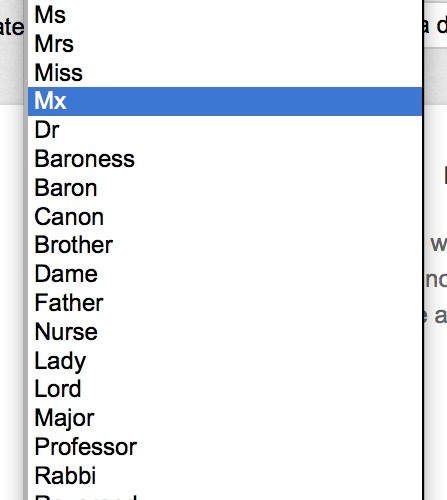 How Not to Alienate Clients Before Asking their Name

When filling out almost any form, from a job application to a utility registration, the first requirement is usually to select a title from a drop down list. Options range from the conventional Mr or Mrs to the increasingly obscure: Baron or Baroness, Lady or Lord. Apart from several academic or professional titles, such as Professor, Dr or Nurse, most of the other title options are gender specific. If someone is not in possession of a title such as Professor, they are forced to disclose their gender. This is not the only personal information that titles can reveal, however. Whilst the more enigmatic Ms is normally present, women are additionally offered the opportunity to disclose their marital status through selecting Miss or Mrs. Characteristics such as religion can also be revealed through titles like Rabbi or Reverend.

[quote]”If the first point of contact between an organisation and an individual forces them to preface their name with a gender they do not identify with, this is alienating.”[/quote] 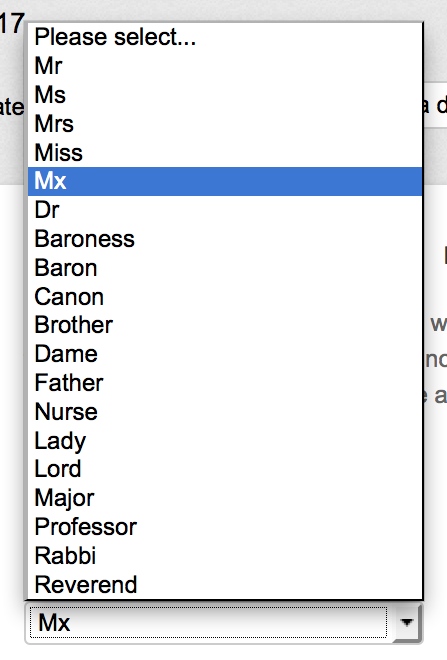 Although this practice is dictated by custom, and may be seen as nothing more than an administrative convention, it is worth questioning whether this is really the best way to greet future employees or customers. Drop down title menus do not generally give the option to decline to provide a title, so individuals are forced to begin their relationship with the organisation by disclosing some or all of the mentioned characteristics. Why is this initial information gathering necessary? The innovation of the title Ms has adapted to the modern view that women are no longer defined by whether or not they have a husband. If the right to withhold from disclosing marital status exists, why is there no parallel option to withhold other personal information? Furthermore, the options of titles given are in themselves exclusive and alienating for individuals who do not consider themselves to fit into one of the categories presented. For example, transgender/transsexual people may not identify with the traditional binary gender options of male and female. If the first point of contact between an organisation and an individual forces them to preface their name with a gender they do not identify with, this is alienating. For someone in this position, further contact with the organisation then occurs under the shadow of this initial disaffecting experience.

A new title provides some relief for those wishing to disclose a non-binary gender: Mx. This was initially seen as an option for individuals who wanted to choose a gender-neutral alternative to Mr or Ms, however it has become increasingly connected with a transgender or transsexual identity. Some people see the title Mx as short for ‘Mixter’, implying a gender that is neither conventionally female nor male, such as Brighton and Hove council, which recently introduced this title as an option on council forms as part of a group of measures aimed specifically at improving the accessibility of their services to transgender/transsexual people.

However, as Mx becomes increasingly associated with one set group of people, other groups who self-identify as having a different gender identity, such as Intersex, will once again feel that there is no suitable title for them in the options given. A whole host of titles could thus be invented to avoid alienation: from gender titles representing the many different gender identities people possess; to titles for the religious leaders of every faith; and titles indicating the marital status of men, or titles indicating civil partnership or same-sex marriage, for those who do not identify with the traditions of heterosexual marriage. Presenting a limited list of titles is always going to exclude some, but reflecting and encompassing all possible individual statuses would require an impossibly long list. However there is no need to embark on this time consuming and pitfall-laden task. Instead of continuously innovating newly inclusive title options why not simply dispense with the convention that requires the categorisation of individuals in the first place, and thus avoid alienating anyone?

Only convention stands in the way of abolishing the use of titles. Developing businesses are in a perfect position to begin their engagement with their colleagues and the public in a modern way that does not alienate. Without titles, each person is introduced to the business without needing to categorize themselves, without having to reveal, conceal, or even consider some of the most personal information about themselves. To begin a relationship with a client or co-worker based upon their individuality means offering them the invitation to introduce themselves as they wish to. This beginning is not only more pleasant for the person, but means the company can benefit from a respectful engagement with many groups of people who are often alienated by outdated conventions.

Against traditions that regard addressing someone by their title as a mark of respect, it is a gesture of respect to all people to respect their individuality by not requiring self-categorisation in this way. Businesses should abolish drop down title boxes, and instead initiate contact with people by asking how they wish to be addressed, or simply by asking their name.