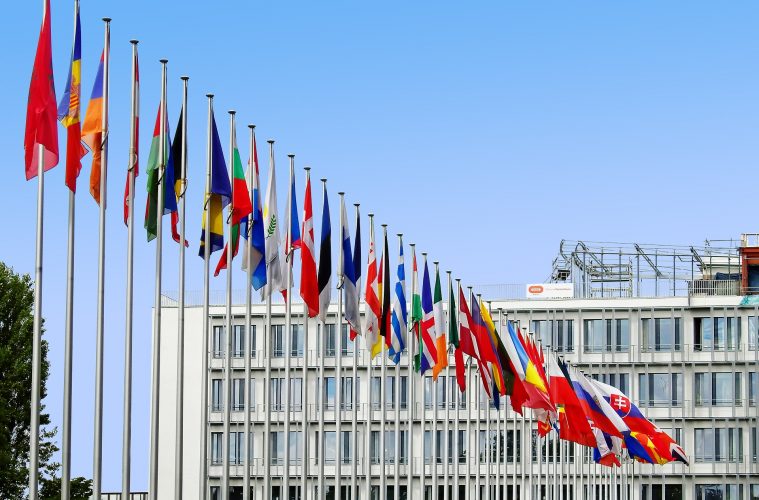 The phrase “location, location, location” doesn’t just apply to real estate, it also applies to startups. As all entrepreneurs know, having a great idea is just the first element of a successful enterprise. Many other factors contribute to determining your ultimate success, including where you start a new company. So how does the UK rank in terms of being a great place for a startup? What’s the best country in Europe for startups?

Consumer research company NimbleFins recently completed a study of 50 countries in Europe to find the best places for startups. The study incorporated metrics from the World Bank, World Economic Forum, OECD and UNESCO to get a data-driven picture of how countries compare when it comes to factors that can impact a startup like business climate, labour quality, cost of doing business and economic health of the country. 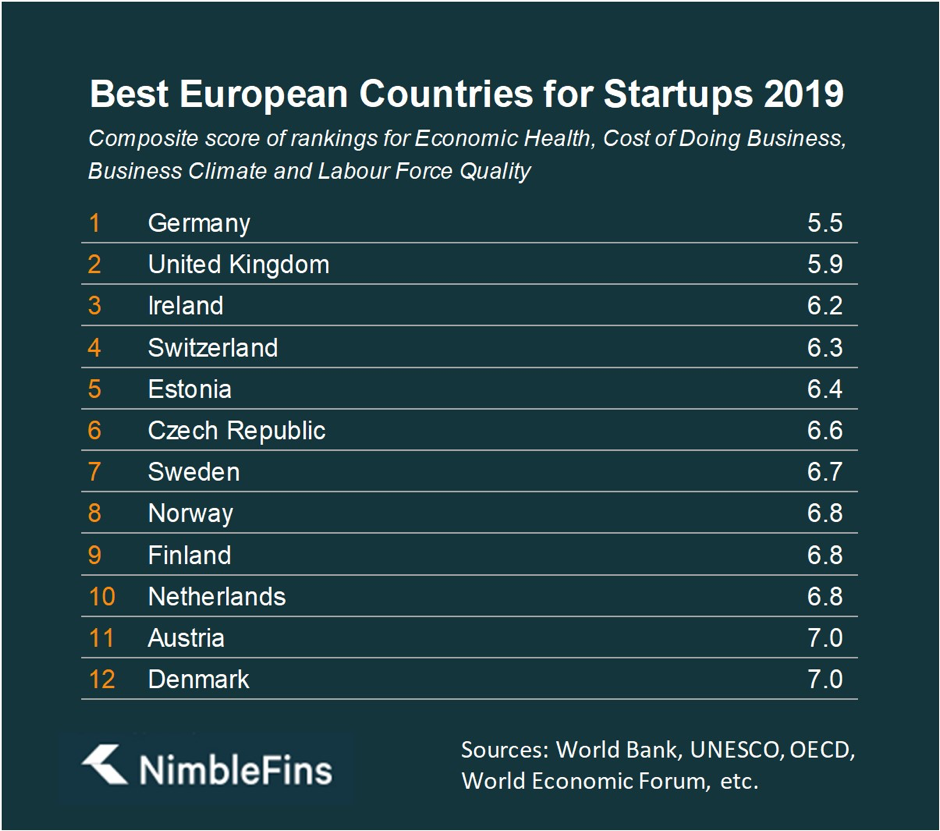 The results showed that the United Kingdom ranked as the 2nd best country overall in Europe for startups, just behind Germany. Despite worse overall economic measures as measured by lower GDP growth expectations and GDP per capita, the UK remains a solid choice for entrepreneurs.

How the UK Shines for Startups

The United Kingdom ranked number 2 overall out of 50 countries studied to determine the best countries in Europe for a startup, with the most notable performances in the Costs of Doing Business and Business Climate categories.

For example, UK startups have lower expected costs of doing business than many other European countries— declining corporate tax rates and lower salary expectations are a clear benefit to startups in the UK. Small businesses with greater hiring needs will find this particularly helpful. In fact, the UK ranked #3 for Costs of Doing Business behind the Czech Republic and Estonia. 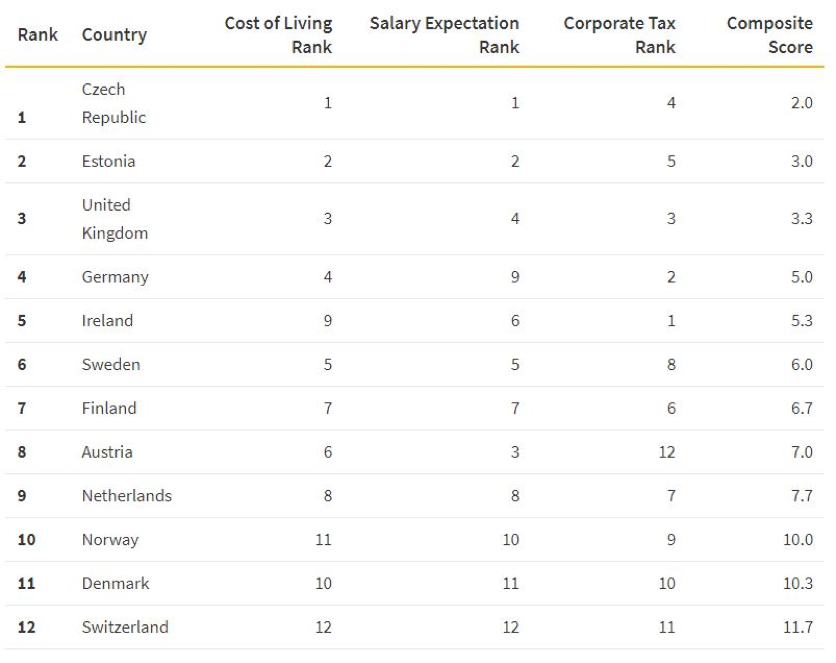 The UK also stood out relative to other European countries for a favourable Business Climate. For example, startups have easier access to financing for new ventures (i.e., venture capital) and the World Bank’s metrics for “ease of doing business” showed that regulations are relatively more business-friendly in the UK than other European countries.

As complying with regulations can require significant expertise and expense, small enterprises, in particular, may find the UK environment advantageous relative to other European countries. Regardless of country, businesses operating in or offering goods and services to EU countries must comply with GDPR data privacy regulation. 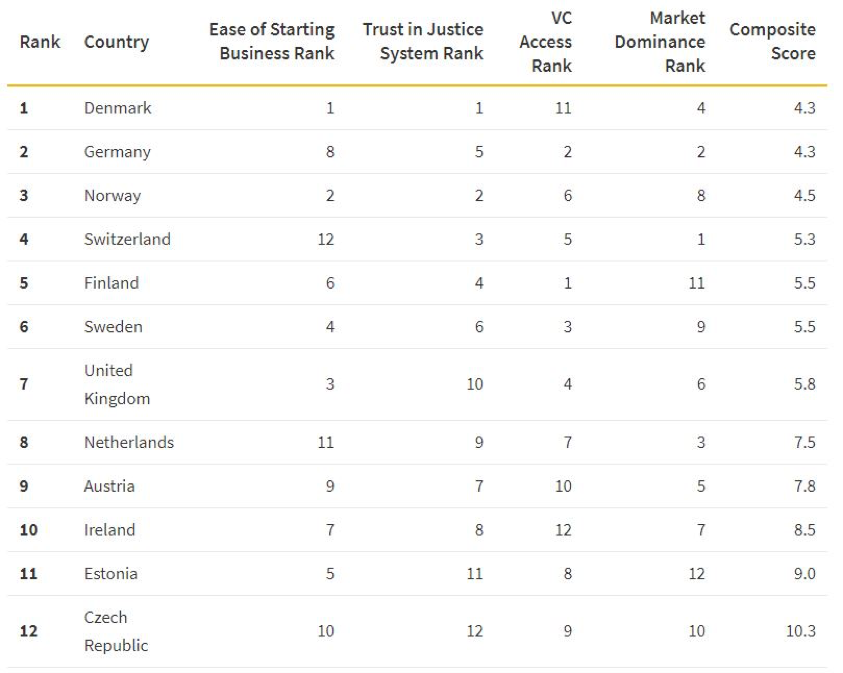 In addition to these formal metrics, entrepreneurs have can benefit from a wide array of startup support organizations which can assist with starting a new venture in the UK.

Where the UK is Weaker

Besides suffering from a softer economic position at the moment, the UK didn’t perform as well in Labour Force Quality (ranking #9 in the top 12) due to lower educational attainment rates or trust in the justice system.

Which Countries Ranked Higher than the UK

Germany topped the charts overall as the best country in Europe for startups, with good access to venture capital and even lower corporate tax rates than in the UK. According to World Bank metrics, Germany ranked #2 in the group for market dominance, meaning competition is not restrained by a few large players which can be an important market feature for startups. Finally, Germany has a well-educated workforce, with 83% of adults having at least an upper secondary degree.

Switzerland ranked #1 for Labour Quality, with high education attainment rates and the best-specialised training services. The Netherlands ranked 1st for Economic Health. The Czech Republic ranked 1st for Cost of Doing Business, in large part due to lower salary expectations and cost of living. Finally, Denmark ranked 1st for Business Climate, driven by the ease of starting a business and trust in the justice system.

For more details on the metrics and methodology used to determine the ranking, see NimbleFins’ original study Best Countries in Europe for Startups (https://www.nimblefins.co.uk/best-countries-europe-startups).